Which Web Developer Role Should I Advance In? 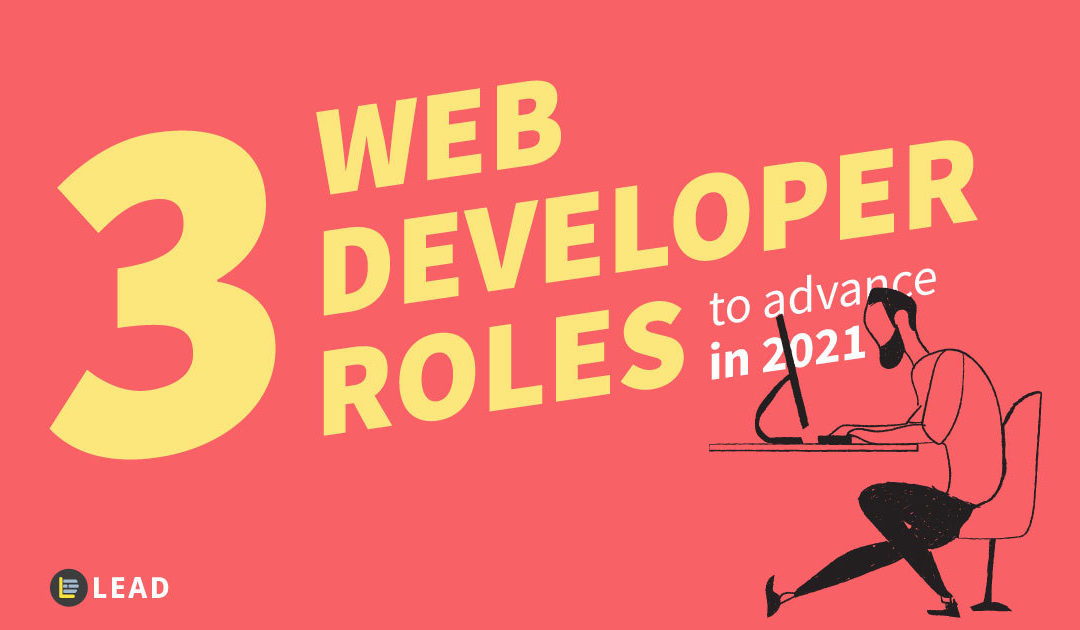 You have mastered the basics of web development. That’s awesome!

But where do you go from here?

Whether you’d be utilizing your programming skills for your current job or becoming a full-fledged web-developer, there comes a point where you will need to specialize in a certain field or niche. Building your experience in programming is a journey.

There are 3 types of roles in web development you can specialize in:

Here at LEAD, we will show the specializations of each role, what their job might require and their current demand. With this information, we will help you figure out which niche you should specialize in the next 5 years.

The Expectations for Web Developers

As more people start shifting their business online, the demand for web developers has increased with an extended job description.
And with every demand comes expectations you need to fulfil.

And for each web developer role, you will have specific expectations to fulfill. To understand these additional expectations, you need to understand how a website works.

A website has two clear segments: the front-end and the back-end. The front-end is what your users see on the website: the homepage, visual designs, pictures, videos, tabs, CTA buttons etc. This end allows your users to use the data provided on the website and interact with its pages.

The back-end is the workings behind the website that your users don’t see. This includes databases, coding functions, frameworks and more.

The back-end is responsible for completing performance requests made by a user such as pressing a button or ordering a product.

Web developer roles are defined by the parts they specialize in, and these parts require different requirements. For example, back-end developers would be expected to know advanced programming codes such as JavaScript or Python to create automations and data links. But if you are a front-end developer, you do not need to know these languages because simpler languages such as HTML or CSS are enough to build a basic website.

However, if you’re a front-end developer who knows Javascript or Python, you are considered a more desirable candidate among companies because you can program additional interactive elements such as audio, videos and page animations.

What is a Front-end Developer?

A front-end developer is a software engineer who creates and optimizes the user’s experience (UX) at the front-end of a website.

They don’t draw any artistic designs or illustrations on the website – that’s the job for a web designer.

Instead, a front-end developer works on a website’s functionality, visual organisation and interactive cues to make a user’s experience on a website easy and enjoyable.

Every choice that a front-end developer is geared towards the user’s experience.

A good front-end developer will also have a comprehensive understanding of how humans interact with machines and design principles to put these fundamentals ideas into action.

Responsibilities of a front-end developer

As a front-end developer, you will be managing user interface design (UI), programming codes, project management and tests to:

You will also need to know some of the following languages:

HTML should be the first programming language you learn because every site on the web uses it. Without it, you cannot do front-end development. How Much Do Front-end Developers Earn?

However, the final amount depends on your experience.

For example, if you are a fresh graduate, you may start off with a salary worth RM2,300 to RM3,000 per month. Once you gain 2 years of experience, you can bargain to get a raise of RM3,500 per month.

A back-end developer creates and maintains the back-end (includes server side) of the website to ensure that the website is functioning properly.

Their main goal is to ensure that the flow of data between the front-end and back-end of the website runs smoothly.

So whenever a request is made by a user at the front-end, the information is passed through efficiently and the request is accomplished instantaneously.

The job is actually more difficult than it sounds: back-end systems can be very complex, despite how simple it looks in the front end.

Looks quite simple right? All it has is a search bar, a few buttons and typography for its logo.

But behind the search bar, at the back-end, there is an enormous, complex system filled with hundreds of libraries. This part is often hidden from the viewer’s sight.

In order to bring relevant information to the results page, the keyed-in request has to go through a complex network of server codes and millions of indexed files of data.

Responsibilities of a back-end developer

To build a back-end system, a back-end developer will need to some of the following languages:

With these languages, they can build tools that make up a comprehensive network with:

By building and maintaining these applications and tools, the system will provide multiple functions and utilises for users on all screens.

Salary of a back-end developer

If you do a quick search on Linkedin, you can see that people don’t normally seek out back-end developers. Just look at the first page when you search up ‘web developer’: This is because many companies don’t need a back-end developer to build their website.

Many company websites are quite simple: they only need to show their company information, their contact, and at most, links to their social media or other digital platforms.

Hence, for back-end developers, most companies will ask for a connection between their front-end and back-end infrastructure and a few APIs.

While the market for back-end developers is not as large as front-end developers, they are in high demand among the e-commerce industry, data-based companies and other businesses that rely heavily on digital processes.

According to Indeed, the average salary of a back-end developer in Malaysia is RM 66,773 per year or RM5,564 per month.

And according to Average Salary Survey, Python Developers earn around RM155,500 a year or RM12,958 per month.

Python is currently one of the most popular programming languages due to how user friendly and flexible it is. If you’re interested in being a Python developer, sign up for one of our Python 360 classes here: https://thelead.io/python-360 Whether you are a front-end or a back-end developer, you must know some basic knowledge and skills of each end to create a smooth functioning website.

Because of this, most web developers will eventually evolve into full-stack developers.

A Full-stack Developer is the jack of all trades: they handle both the front and back end parts of a website.

Full-stack developers can create a functional, dynamic website all by themselves.

Hence, this role is the most in-demand web developer job in the industry. Their versatility allows full-stack developers to:

It is also the reason why we teach Full Stack 360.

By attending one of our classes, you will not learn the basics of both front and back end development, but you will also gain a complete understanding on how websites work and you will know which area you should specialize in.

Responsibilities and Skills of a full stack developer

The job scope of a full stack developer would cover the responsibilities and skills of both a front-end and a back-end developer.

Hence, a full stack developer would have known multiple programming languages for both ends and have experience in both ends.

However, no matter how proficient an individual is, besides problem solving skills are valuable in these roles, communication skills and soft skills are equally as important. However, at the cost of learning a wider range of skills, many full-stack developers don’t have mastery on either end of the website. Oftentimes, these developers would lean their expertise on one end compared to the other.

Full-stackers who have mastery in both ends are rare.

Overall, a full stack developer’s diverse knowledge of both ends helps speed up the web development process and they can easily troubleshoot any problems that occur at any part of the website.

Salary of a full stack developer

According to Indeed, a full stack web developer in Malaysia makes on average RM5,633 per month for a starting position.

However, this salary may be increased depending on your skillset, proficiency, experience and how much value you bring to the company.

To learn how you can bargain a higher full stack developer salary, read more details in our article here: https://thelead.io/web-development/full-stack-web-developer-salary

Which Path Should I Choose?

That will depend on your expertise, capabilities and personal goals.

In the end, you know which path is best for you, but we can help you break down what each role entails and what you would be dealing with.

No matter which path you choose, you will certainly get the job with the advancement of technology. Web developers are in high demand with every company shifting their business online.

What you should focus on isn’t which role will get you the job, but where you want your career to be headed.