Why does a senior data scientist learn web development? (With Wyhow)

Meet Wyhow. An experienced Data Scientist who has been in the data science industry for a decade recently learned web development skills to improve his problem-solving abilities.

Wyhow has a decade of experience working with data and serving as a senior data scientist at Khazanah Nasional Berhad.

His day-to-day work includes creating Power Bi monitoring reports, accessing third-party APIs, automating reports for other departments, etc. According to him, his most exciting job is developing custom web applications.

However, he still describes himself as a problem solver rather than a data scientist. And that always spurs him on to learn more.

The data science industry (and your skills).

According to Wyhow, a data practitioner for close to a decade, the data science industry has come a long way, which defines Wyhow’s journey.

He started as a data scientist in 2015 using Microsoft Excel, which required him to take Microsoft certification exams to begin his journey. At the time, data science was not well-known industry.

Over the years, the era of dealing with big data came into the market. Eventually, he had to acquire skills like Python to deal with the problems of this new era.

Today, many resources allow us to learn data science much faster and easier. However, we experience a different set of challenges. This can be observed with recent graduates that excel in hard skills but has weak presentation skills, and one of the key skill of data science is communication.

He mentions that many universities and third-party programs are not even aligned with industry needs, resulting in students who are not up to speed. As a data scientist, you should know how to communicate with a non-technical person, which is lacking in the industry.

But he overcame all these difficulties and when we asked how he did it, he quipped:

“I just want to keep trying more and more until I find my limit. That’s my personal motivation, and I love taking on challenges,” Wyhow said.

We were curious and asked him, what was the reason he decided to go into web development after being a data scientist for a decade, and he replied:

“I noticed that many universities teach students how to code using different tools like Python, R, Jupyter, etc. And I can’t stay in that comfort zone much longer because using all these tools is becoming the “norm” in the industry,” Wyhow said.

“I just want to set myself apart from the competition. My goal is to acquire cloud computing and UI /UX capabilities next, and these goals require front-end and back-end skills, which is why I chose web development as part of my future plan,” Wyhow said.

How web development can help data scientists do better?

Generally, picking up web developing skills as a data scientist allows you to solve more problems in a company. And here’s what Wyhow said:

“Standard visualization tools such as Power BI allow you to display data from a database which transfers data in one way but it won’t allow someone to interact enough with the app,” Wyhow said.

“For example, if you want to catch users’ search terms like how Google does, Power BI won’t be able to do that. But, building a custom web application makes the insights more interactable with 2 ways to transfer data, one from the user and the other from the database.” Wyhow said.

“In addition, Power Bi can slow performance when linked to certain databases, but with a Web application, we can control performance much better,” Wyhow said.

What is the outcome of learning web development as a data scientist?

According to Wyhow, after a decade of experience in the data industry, he reached his limits working with specific data science tools, so he wanted to turn to web development to gain more design freedom.

However, working with local solution providers is expensive, and he had to work back and forth, causing a lot of time and effort.

“I can now design it how I want, from user interaction to insight display, etc. It’s customizable.” Wyhow said.

Now, this is where any working individual will fall into the trap of building no-code websites. When we asked Wyhow about this, he replied:

“It’s about not having to rely on vendors all the time, and learning these skills would also help me build my own portfolio in a custom web application as well,” Wyhow said. 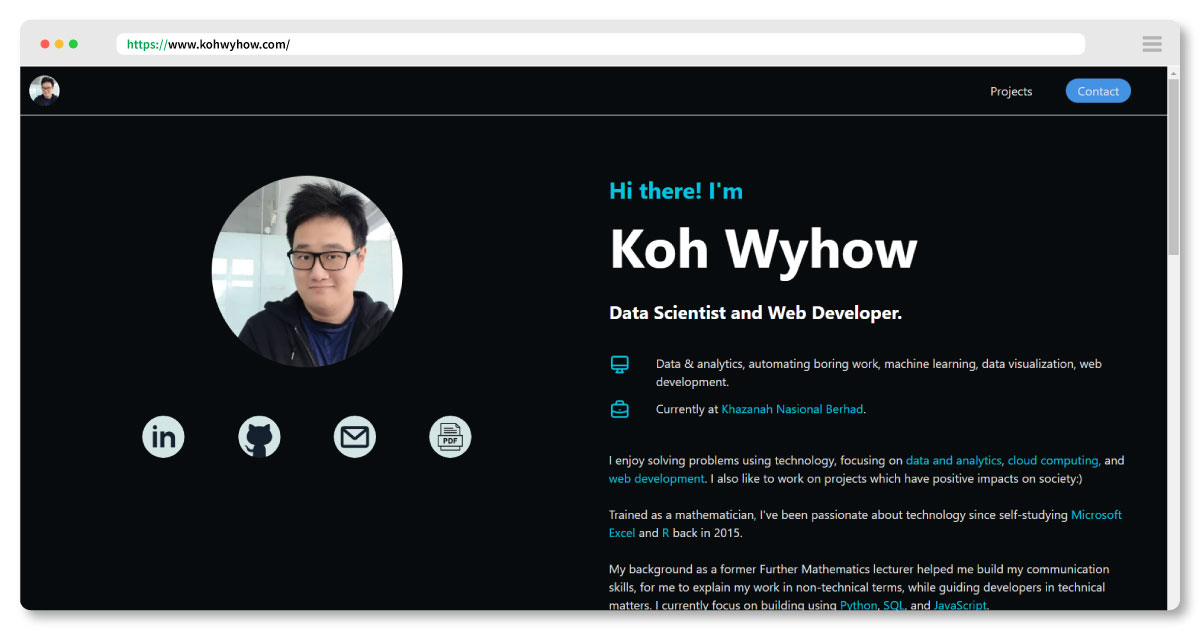 How can “Zero to Market” help a data scientist get into web development faster?

“Getting into web development was scary at first, and I even tried to develop an Android application, and man, I was exhausted,” Wyhow said.

I found LEAD’s Zero to Market workshop through a Facebook ad. I figured why not gather my courage and try it again. And it turned out I made a good decision.” Wyhow said.

So after going through the 30-day journey with a group of participants, he can now use more front-end features instead of relying on Power BI all the time.

“Before, I was more of a left-brain person. After acquiring web development skills, I see the problems in designing a web application with my data science skills. I also discovered that I like doing this because it allows me to be more creative.” said Wyhow.

Wyhow also said the one-hour daily lessons videos helped him learn web development flexibly whenever he wanted, as it is difficult for a working professional to complete long-hour courses without interruption or mental fatigue.

According to Wyhow, the number of charts and designs were fixed when utilizing any data visualization tools such as Power BI or Google Data Studio. Learning these new skills will definitely expand your horizons as a data scientist with more capabilities.

“Whether it’s a non-tech person or the general public, no one really cares about the codes you write, but people do care how the work has been done and presented. So that’s why I picked up these skills,” said Wyhow.

“It’s always scary when picking up new technical skills, and the worst thing that could ever happen to you is your code may not work. But nowadays, with the help of new-gen tools, the miswritten codes will be automatically highlighted for you in any web development tool. It’s easier to pick these skills nowadays compared to what I had back in 2015.” said Wyhow.

End of the day, your discipline and courage is the most important thing to stick to your goals, and you’ll be able to do it.” said Wyhow.

At LEAD, we’ve helped hundreds of people – including Wyhow. And we can help you too. Grow your web development skill set and develop additional skills on top of your data portfolio with Zero To Market today.

Zero to Market helps you build a world-class custom web application and become a full-stack data scientist. Pre-enrolment is now open, join the workshop to sharpen your skills with a group of learners. 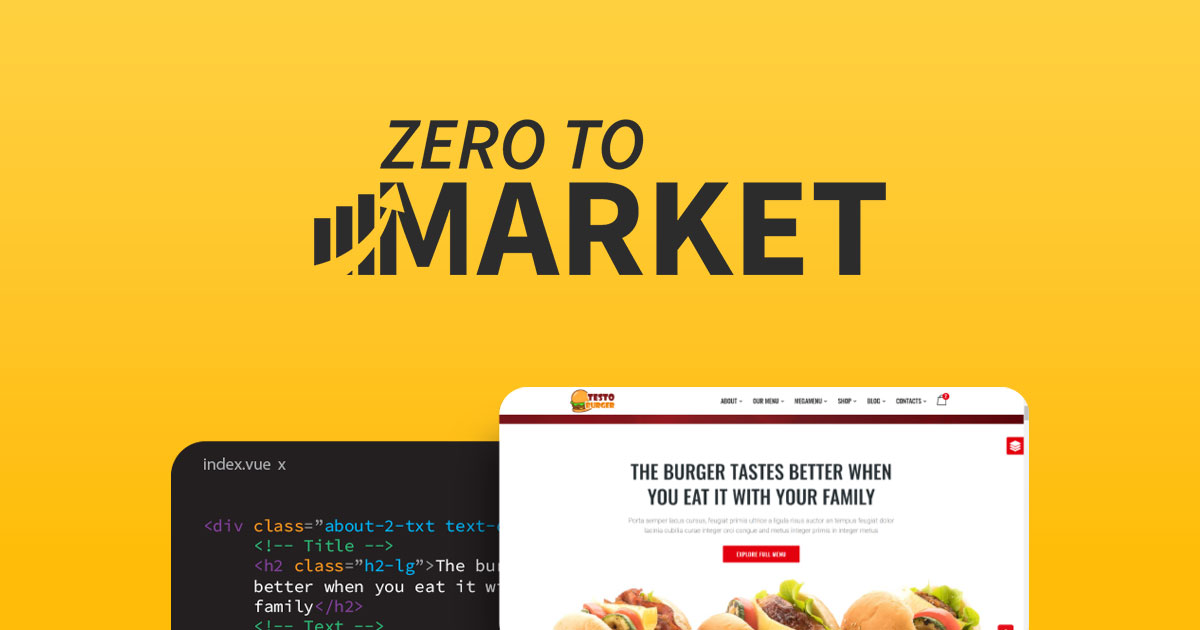 ← Want to Learn Data Science? Practice Every Day (With Gary). How Web Development Skills Gave Me the Confidence to Communicate Better (With Ash). →

← Want to Learn Data Science? Practice Every Day (With Gary). How Web Development Skills Gave Me the Confidence to Communicate Better (With Ash). →